Because it is impossible to consider the life and achievements of George Allen without frequent references to John Ruskin, his considerable talents have often been overshadowed by Ruskin’s enormous presence. The renewed interest in Ruskin’s publishing methods offer the opportunity to examine George Allen’s role in that scheme, and to evaluate his significance in its success.Ruskin’s own words on George Allen in Praeterita serve as a good starting point for a brief outline of Allen’s life:

I took two pupils out of the ranks to carry them forward all I could. One I chose, the other chose me ~ or rather, chose my mother’s maid, Hannah, for love of whom he came to the college, learned to draw there under Rossetti and me, and became eventually Mr. George Allen of Sunnyside, who, I hope, still looks back to his having been an entirely honest and perfect working joiner as to the foundation of his prosperity in life. (Praeterita Vol. III, chapter 1)

A carpenter by training, George Allen was 22 years old in 1854 when he first saw Ruskin at the Working Men’s College. Having enrolled in the drawing class, he impressed Ruskin with his natural ability and shortly became one of the assistant drawing masters. In 1857 he left the building trade and became Ruskin’s full time assistant, where at his new employer’s instigation he learnt the skill of engraving under two contemporary masters of the art, Lipton and le Keux. He accompanied Ruskin on several geological trips into the Alps, where his instinctive grasp of strata and formations proved a useful adjunct to Ruskin’s knowledge. He later went on to build up a significant collection of minerals, which was purchased by the Oxford University Museum after his death. But it is for his role in the publishing house of George Allen for which he is often best remembered, although it might be argued that even there he resided for many years in Ruskin’s shadow.

As his assistant, Allen had been involved with many tasks linked to Ruskin’s own interests and pursuits. He was with Ruskin during the cataloguing of the Turner Bequest in 1857, and also at this period furnished drawings for the illustration of Ruskin’s lectures. In 1862, with his young family, he accompanied him to the Savoy mountains for two years, during which time he was engaged upon a project to engrave certain of Turner’s drawings at their full size ~ this work being interrupted by various geological expeditions and visits to sites which Ruskin considered of vital artistic or architectural significance.

When recalled to England in 1864, Allen slotted back into his former role as assistant and engraver, making regular trips from his home in Keston to Denmark Hill, as and when summoned by Ruskin. It was such an occasion in December 1871 when Ruskin sent for Allen and announced that from the following month Allen was to act as distributor of his new pamphlet Fors Clavigera, and that the delivery from the printer was due at Allen’s home in just two weeks.

When Ruskin decided to establish this radical, but in his view fairer way to publish his work, George Allen was merely the instrument of sale and despatch. But when, a few years later, he considered taking his existing works away from Smith, Elder & Co., it was George Allen who persuaded Ruskin of the advantages of keeping control of the copyright, thus controlling the reprinting of the earlier titles. And in later years, after Ruskin had held out for so long against the idea of cheap editions of his works, it was Allen who convinced him of the need to supply the new literate masses who were unable not afford the finely bound volumes currently available to them.

It will be seen that the relationship of master and pupil was slowly reversed. Allen’s business acumen provided timely reprints of Ruskin’s titles long out of print, and provided both ends of the book-buying market with what they desired. Whether it was luxuriously bound and illustrated volumes printed on hand made paper with no spared expense, or reprinted editions in simple but elegant cloth covered boards ~ George Allen could provide it, and in doing so, provided also the income that Ruskin would later depend upon. In the early days, he took his instructions from Ruskin, and would offer his own suggestions for Ruskin’s approval. By the time that Ruskin’s mental powers had faded, George Allen had assumed virtually all responsibility for decisions made by the much respected publishing house that carried his name.

Welcome to the Introduction Page of the website that is designed to promote interest in, and further the appreciation of
George Allen
(1832-1907)
publisher, engraver, mineralogist, geologist, and lifelong assistant of John Ruskin. 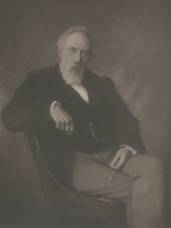 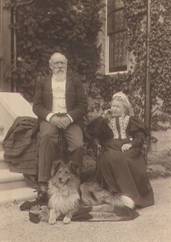 George and Ann Allen on the front steps at Sunnyside.
Undated, about 1900.